February 04, 2014
Do you remember when you were growing up and everything was simpler, when what was right was right and what was wrong was just that....wrong! I mean the times when we didn't find an excuse for every wrong doing, we didn't justify the bad things we did or people did, we had morals and we were straightforward enough to own up when we miss it or misbehave instead of explaining it away. Do you remember how it was such a taboo not to be a virgin when a lady is getting married? (We might not have been born then but we heard the gist), nowadays, its the virgins that are ashamed to talk or shout it out because we have somehow erased the thin line between right and wrong that we now unconsciouly accept that its okay to sleep around while still single, infact some guys are not keen on marrying virgins because 'they lack experience'. Do you remember how people would rather die than divorce their partners? (disclaimer, I don't advocate for people to stay in abusive marriages) , these days, we now have people who divorce after 72 hours, 72 days, 6 months and when you ask for their reasons, you hear stuffs like 'we grew apart' , 'we are now different people' , 'irreconcilable differences' and so on. I remember reading it somewhere where an elderly couple was interviewed because they had been married for about 60 years or so. When they asked them how they managed to stay married for that long, they replied and I quote (maybe not in exact words ). .. 'in our days, when things go bad, we don't throw them, we try to fix them'.

Do you remember how young people used to pride themselves on how hard they work, how responsible they were? These days, what we have are young people who are not willing to work but they want to live the good life so they are always looking for the easy way out. Young men who will rather do yahoo yahoo, sleep with older women for money, will not marry any girl except they are sure she has enough money or her daddy is rich enough than do legitimate work. Young women who will rather sleep with married women and men old enough to be their fathers than work hard.
Long long ago, many of us didn't even know the meaning of homosexuality and when we eventually knew, we were totally against it. Now it has somehow seeped into our society and invariably into our minds and because it will seem "uncool" and "hateful" we now find ourselves secretly agreeing that some people were actually made that way. Please know that am not saying you shouldn't support homosexuality or whatever else you believe or support, I'm however trying to challenge your thinking. Am asking you to "guard your hearts" lest the same things that you know are wrong suddenly begin to look right to you. Many of us have have found ourselves doing the very same things we vowed we will never do but because it has increasingly become very difficult to live upright and do the right things, we find ourselves bending the rules and we justify it by saying "haaa, you can't survive if you don't do this, this is the way they do it now, things have changed o" and so on. Remember what the Bible says ??? 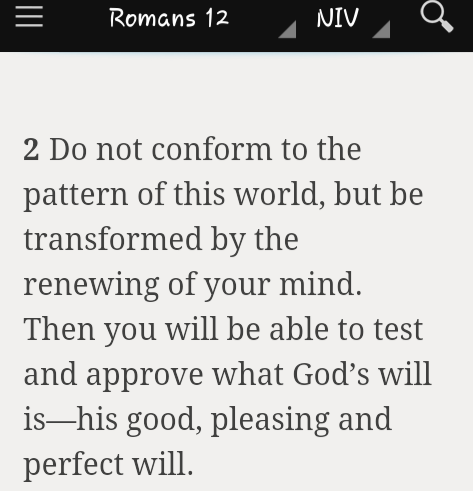 The only standard we have as Christians is the Word of God. What does the Word say about that particular situation? We should not allow ourselves to be 'tossed to and fro by every wind of doctrine'...do the Word! Don't be concerned about pleasing people, be more concerned about pleasing God. If you are using the world's standard to judge yourself or to dictate how you should live, you will self- destruct. Don't depend on what people tell you, read your bible, know God for yourself so that you will be able to defend whatever you believe. If you find yourself in any confusing situation, ask yourself - what does the Word say concerning this, then CHOOSE to do the Word of God.

As we are rounding up this year, I have decided to count my blessings and look back on all the wonderful things God has done for me in 2013. I know it is easier to dwell on the things He has not done, the goals that were not achieved and the many things I trusted God to do this year that has not being done but then again, I remember that "only great fools are not grateful". I also remember that only the living can dream, can complain, can cry, can have goals and since am still alive, God deserves my gratitude. So without much ado, Let me start counting the blessings I have enjoyed so far in 2013 especially the ones money can't buy : 1. Life - I can't thank God enough for being alive, I try as much as possible not to take it for granted that I AM ALIVE. Many people have died this year and my being alive is not because I am more righteous or more prayerful, its simply by the mercy and grace of God. 2. God - I am super grateful for my relationship wit
Read more